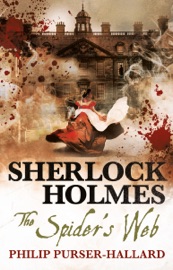 Sherlock Holmes meets Oscar Wilde in this brand-new mystery inspired by The Importance of Being Earnest.

It is 1897, and Sherlock Holmes is called in to investigate a mysterious death at a society ball, hosted by a family with a remarkable past.

After an unidentified man pitches to his death from a balcony during a party hosted by the famed Ernest Moncrieff, Viscount Goring asks Holmes and Watson to prove the innocence of his wife, who is suspected of the crime. But members of this elite circle, including the indomitable Lady Bracknell, are just as concerned with their interference as they are the identity of the murderer. For though the history of Ernest Moncrieff, alias Jack Worthing, is well known, there may be more to the story of his discovery as a baby in a handbag at Victoria Station. And why did the dead man give his name as 'Mr Bunbury'? Soon Holmes and Watson are on the trail of a mysterious blackmailer who trades in the shameful secrets of an elite circle.