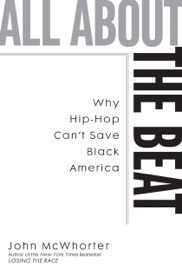 All about the Beat

The bestselling commentator, hailed for his frank and fearless arguments on race, imparts a scathing look at the hypocrisy of hip-hop—and why its popularity proves that black America must overhaul its politics.

One of the most outspoken voices in America’s cultural dialogues, John McWhorter can always be counted on to provide provocative viewpoints steeped in scholarly savvy. Now he turns his formidable intellect to the topic of hip-hop music and culture, smashing the claims that hip-hop is politically valuable because it delivers the only “real” portrayal of black society.

In this measured, impassioned work, McWhorter delves into the rhythms of hip-hop, analyzing its content and celebrating its artistry and craftsmanship. But at the same time he points out that hip-hop is, at its core, simply music, and takes issue with those who celebrate hip-hop as the beginning of a new civil rights program and inflate the lyrics with a kind of radical chic. In a power vacuum, this often offensive and destructive music has become a leading voice of black America, and McWhorter stridently calls for a renewed sense of purpose and pride in black communities.

Joining the ranks of Russell Simmons and others who have called for a deeper investigation of hip-hop’s role in black culture, McWhorter’s All About the Beat is a spectacular polemic that takes the debate in a seismically new direction.