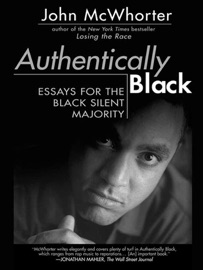 The critically acclaimed book from the bestselling author of Losing the Race and The Power of Babel
John McWhorter is one of the most original and provocative thinkers on the issue of race in America today. In Authentically Black McWhorter argues that although African-Americans stress hard work and initiative in private, they have assumed the mantle of victimhood in the eyes of the public and have thereby created a distorted meaning of what it is to be "authentically black." McWhorter takes on this mentality and its debilitating implications—in topics ranging from rap music to the reparations movement, to the portrayal of African-Americans on television to racial profiling— injecting new ideas and a fresh approach into the nationwide debate on race. Authentically Black is a powerful and important book that will inform and influence the opinions of Americans across all racial and political spectra.